Preserving history. Building for the future.

The Society’s first major project began in 1970 with the cleaning and painting of retired Union Pacific locomotive 3206 in Spokane’s Highbridge Park. That same locomotive was the first piece of equipment that was moved to the Spokane Interstate Fairgrounds in 1978. 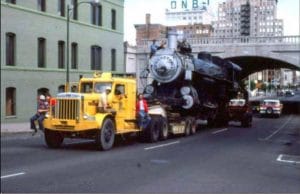 Since that time, the group’s train display and museum has grown to include almost 30 different rail cars and engines plus an outstanding selection of railroad memorabilia and an extensive library.

Located at the Spokane Interstate Fairgrounds for over 30 years, the Society was given an eviction notice in June of 2002 that instigated a statewide search for a new home. In the meantime, the organization continued to operate the narrow gauge ride and museum train during the Spokane County Interstate Fair each September through 2014.

In December 2002, the Society chose a 30-acre parcel of land two miles west of Reardan as its new museum location.

How we got here:

Developing a new museum and moving a collection of our size was a monumental project. We thank Eastern Washington Gateway Railroad (EWGR) who transported our collection to Reardan by rail. A crossing on Sunset Highway was installed prior to the summer of 2010 joining a spur from a switch off the EWGR onto the Reardan site. The line is now operated by Washington Eastern Railroad.

Laying display tracks continued throughout this time. In the summer of 2011 a great deal of infrastructure was completed. The group also developed a location to place a donated Union Pacific turntable. It was transported from Spokane by rail and installed in its permanent location by crane in January 2012. Few rail museums have such an asset, which is one of our largest artifacts. Plans for the museum facilities moved into high gear in 2012 as Spokane architecture firm MMEC was hired to produce a site plan for the Reardan property.

2013 brought continued work on the design and fundraising for Phase I of the museum (a conservation and restoration building and visitors center allowing us to become operational at the new location) and a fall groundbreaking celebration. Construction of this first building was completed in 2016, with our grand opening held on Aug. 27 of that year.

The organization now operates the Inland Northwest Rail Museum on 30 acres near Reardan, WA, adjacent to the Washington Eastern Railroad short line, at the junction of State Hwy 2 and 231 S. We have added both rolling stock and motive power to our collection recently and look forward to adding train rides on the trackage adjacent to our property during the 2021 season.

Please consider getting on board for this exciting journey by becoming a member of the Friends of the Inland Northwest Rail Museum or making a tax-deductible donation to the museum.